skip to main | skip to sidebar

My pals and I decided to each illustrate a fun fact! Mine is: "Fred Rogers, Known as Mister Rogers, wore sweaters to conceal forearm tattoos commemorating his short stint as a Merchant Marine.
Way to be secretly even MORE awesome, Fred! I put him in a sweater vest to show off those sweet tats!
I had a little trouble with the wallpaper behind him..originally I had a bunch of houses (to represent the neighborhood) but decided it was too distracting so I tried painting over it but it just looked really overworked. So I found this wallpaper texture and I'm pretty pleased with the solution. Check out Amy's and Cassandras! 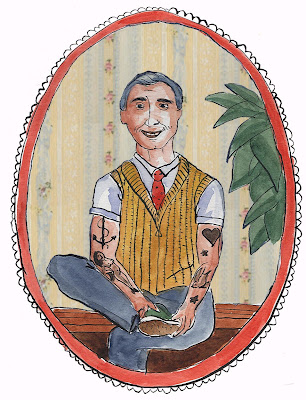 Posted by calamity afoot at 8:20 PM

Haha! This is hilarious! Its a really funny combo. And i like the wallpaper!

i love this fact, i almost did this one! haha. what a bad ass, i wish i could see the real him with his tats, so bizarre!